A President, Europe and the War

A 6-month immersion behind the scenes of the French diplomacy during the war in Ukraine. 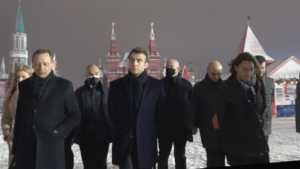 On January 1, 2022, France takes over the Presidency of the Council of the European Union. Schengen reform, climate change concerns or even a new growth model are among the top priorities.

Quickly, the war in Ukraine disrupts all agendas, as Europe now has to deal with the most serious crisis on its soil since the Word War II. It is in this exceptional and dramatic context that Guy Lagache’s solo camera follows at the Élysée and during European trips, from the first days of the crisis, a month before the war and until today, the political actions of the French President assisted by his diplomatic cell. In-between trips to Kiev, Brussels or Moscow, Guy Lagache was allowed to record a few conversations between Macron and his counterparts, as well as a key intense phone call between him and Vladimir Putin. Never on French television has an event of such significance been filmed at this level of decision.